Cornwall has a lot to give and its wild beauty hasn’t gone unrecognised. Hidden coves, rugged cliffs, luring blue seas, wild moors and quaint fishing villages combined with a rich heritage of smuggling, tin mining and seafaring has attracted authors and film makers for many years.

From Doc Martin to Poldark, Cornwall is a star
The list of Cornwall film locations is quite extensive. Whereas Doc Martin, Fisherman’s Friends, Wycliffe and Ladies in Lavender are set amongst pretty village locations; Rebecca, Jamaica Inn and Poldark tap into the stunning rugged coastline and desolate native moorland.

Cornwall’s beautiful scenery has been used as a backdrop to a number of high-profile films and tv series, the earliest known to be in 1899 when Manacle Rocks near the Lizard became the focus of a short black and white documentary film called Wreck of S.S. Paris. Within a short amount of time, Cornwall was being promoted as a holiday destination reachable on the new steam train line operated by Great Western Railways and the silent black and white documentary film Scenes in the Cornish Riviera was promoted in 1904. 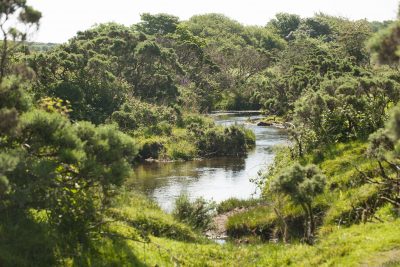 The first really famous film to be shot in Cornwall was Alfred Hitchcock’s interpretation of Daphne Du Maurier’s tale of smuggling: Jamaica Inn. The original was filmed at Bolventor on Bodmin Moor, the location of the famous Jamaica Inn Coaching Inn. The novel proved so popular that a television series starring Jane Seymour was made in 1983, and another adaptation in 2014, which led to criticism of the mumbled Cornish accent! This adaptation was also filmed around the real Jamaica Inn and various sites on Bodmin with the beach scenes taking place around Newquay.

Scenes from George R. R. Martin’s Game of Thrones spin-off House of the Dragon were filmed on Holywell Bay beach in Newquay.

Famous Authors
Cornwall has lured many authors to set their novels amidst its beautiful scenic landscape.

Daphne Du Maurier is one of a long list of authors who made Cornwall their home. The author lived on the south coast at Fowey and amongst her vast collection, wrote non-fiction books about Cornwall. Two other books by Daphne Du Maurier were also filmed in Cornwall: Rebecca, filmed at Charlestown and Frenchman’s Creek, which was filmed around the wonderful Helford River. 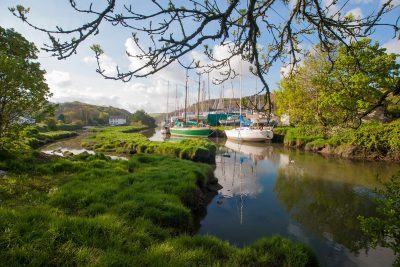 Similarly, Cornish-born author Rosamunde Pilcher saw two of her novels come to life when Coming Home was filmed for television in 1988 and The Shell Seekers in 1989, which was subsequently remade in 2006.

In recreating the Nancherrow Estate and the complex story of Coming Home a number of different locations were used including Prideaux Place in Padstow, Lamorna, Penzance, Porthgwarra Godrevy, Lelant, Marazion and St Michael’s Mount.

Although not Cornish inhabitants, Mary Wesley and Susan Howatch authors of The Camomile Lawn and Penmarric respectively, were drawn to the county.

The Camomile Lawn depicts the beautiful Roseland Peninsula and was adapted for television and released in 1992 with a cast of notable actors including Felicity Kendal and Tara Fitzgerald. Broom Parc House in Veryan, and the village of Portloe, both on The Roseland Peninsula were used as film locations.

Penmarric, which was screened in 1979 uses the locations of Botallack and St Just in order to make the most of the Cornish tin mines, telling a tale of deception fuelled by a promised inheritance.

Charlestown features in many films and television series. The historic 18th-century harbour, complete with its authentic tall ships, makes for an easy adaptation to yesteryear. Mansfield Park was filmed there in 1999 and Moll Flanders (1996), The Eagle Has Landed (1976) and the famous television series, The Onedin Line (1971), all used the harbour for some of their scenic locations.

The Three Musketeers (1993) made use of the harbour along with the picturesque locations of Polzeath, Lanhydrock House, Boconnoc, Pelyn and Pentire.

Hornblower (2002), also made use of the harbour, Falmouth, Pendennis Castle, St Mawes and Rame Head.

Newquay became the backdrop for the television series Echo Beach, with Jason Donavan and Martine McCutcheon in the lead roles. The town has also had bit parts in its fair share of films including The Beatles Magical Mystery Tour (1967), The Eagle Has Landed (1976), an adaptation of Roald Dahl’s The Witches (1990) and in the surf film Blue Juice (1995). Just down the road from Newquay at Watergate Bay, The Magical Legend of the Leprechauns was filmed in 1999.

Cornwall’s rugged cliffs and soulful sea have set the tone for many a haunting tale. The Mystery of the Marie Celeste was filmed in Falmouth in 1935, followed by the The Uninvited in 1944. The much criticised and controversial film, Straw Dogs (1971) starring Dustin Hoffman, was filmed at Lamorna and St Buryan, whilst the 1979 version of Bram Stoker’s Dracula was filmed at Carlyon Bay. In 1988 several locations including Kynance Cove, Mount’s Bay and West Penwith were used for an adaptation of Arthur Conan Doyle’s The Devil’s Foot.

Of the more recent films, scenes from Johnny English, made in 2003, were filmed at St Michael’s Mount whilst Die Another Day (2002) was filmed at the Eden Project and Holywell Bay.

Set in 1936 but filmed in 2002, Ladies in Lavender captured a gentler side of Cornwall. The story, set in a quaint fishing village and starring Judi Dench, Maggie Smith and Miriam Margolyes, was filmed in Cadgwith, Helston, St Ives and Prussia Cove.

TV detective series Wycliffe made the most of a variety of locations around the county by setting its characters as employees in the tourist industry. The original detective novels were written by Falmouth-born author WJ Burley, who later lived in Holywell.

Similarly Dawn French and Catherine Tate appeared in Wild West, a sitcom filmed mostly around Portloe. Described as a dark comedy, it portrays the strange goings on in a close-knit community.

More recently the popular television series Doc Martin, starring Martin Clunes as a London Doctor relocating to practice in Cornwall, was filmed for television at the pretty north coast village of Port Isaac. The village becomes Portwenn with many indoor scenes being filmed in a nearby barn. Doc Martin was actually a spin-off from an original film called Saving Grace, made in Port Isaac in 2002. Both the film and Doc Martin TV series were created by Dominic Minghella, with Martin Clunes appearing in both. 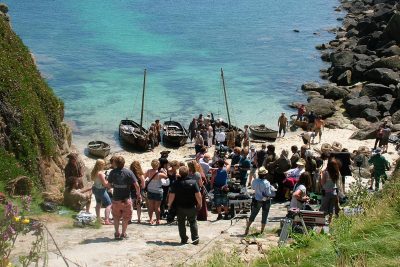 Cornwall will continue to enchant authors and directors. Remakes of previously popular films and programmes continue to delight audiences. Poldark recaptured some of its previous audience and delighted new ones recently. The wonderful Cornish landscape and the lasting combination of a great story, powerful acting and beautiful Cornish scenery continue to mesmerise audiences.