Beaches to match the Caribbean

“As in previous years, Cornwall is the county that has the cleanest beaches”

If you love the beach, then Cornwall is definitely the county for you. Displayed majestically along Cornwall’s coastline are over 400 little pockets of delight that range in size from long golden sands and tropical looking seas to hidden away smuggling coves. In Cornwall, there’s a beach or two for every day of the year!

When you visit the beach, it’s good to know the sand is well kept and the sea is clean. Cornwall has again been recognised as having 8 fantastic blue flag beaches and a further 6 have gained a prestigious Seaside Award. To top that, Lusty Glaze has just been nominated as The Sunday Times ‘best beach in the UK’.

The Independent however, disagrees, naming Bossiney Cove between Boscastle and Tintagel along with the ever popular Polzeath and Summerleaze beaches as their top picks. Trip Advisor users favour the surf haven of Fistral (#no2), and the wide golden sands of Porthminster (#no.6) and Perranporth (#no9).

As for ‘secret beaches,’ The Guardian named pretty Portheras Cove at Morvah, near Land’s End as one of the best in the UK whereas The Express prefer The Strangles, near Crackington Haven along with picturesque Kynance Cove.

As you can see, it’s each to their own. However, we have some great offers that will enable you to visit many of the favourites: 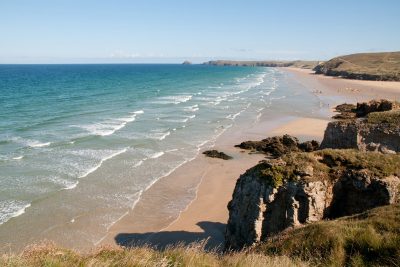 Rooms start from just £79 with a full Cornish breakfast included and dinner is also included on your first night with longer stays. Selected dates only! See July savings at the Manor for more information.

Head to the south coast where pretty Green Acres Cottages await. Careful though, don’t leave it too long, these are the last available dates!

An apartment at Watergate Bay in September

Beachcombers Apartments is just 200 yards from the golden sands of Watergate Bay. Book now for September, when the sea is warmest. For up to 25% off, take a look at September savings at Beachcombers.